If you thought I was distracted by shiny objects before, well woo doggies, if they could see me now! Here are a few thoughts about pregnancy that have come to me over the last couple of weeks. Nothing worth writing a whole post about, but I am documenting none-the-less.

I used to make fun of people who measured their child’s age in months. I have since taken to measuring my fetus’ age in weeks, sometimes even including days if we’re getting technical. On my way to becoming That Parent, I see…

While we are discussing calendars, I need to note that the months don’t add up. My baby book told me I was in month 5 around week 18. Does not compute! Neither does 40 weeks = 9 months. What a load of poppycock.

Maternity pants are weird. I feel like my bum is hanging out, but the pants fit exactly as they should…perhaps better than normal pants. I may never wear pants with a real waistband again.

Second trimester back pains don’t come from things going on internally. It is all about the new sleeping positions. What in the world am I supposed to do with my arms when I sleep on my side?!?

Also – our pillows blow. I have taken to creating pillow origami each night before bed to try to get comfy. I read somewhere that your pillows shouldn’t be able to fold in half. I wonder what Martha Stewart would say about the tri-fold position I can get out of mine. I still am holding out from buying a pregnancy pillow though. I don’t want to kick Randy out of bed…yet and those seem so obnoxious.

In between the queasiness of the first trimester and uncomfortable-ness of the third trimester lives a beautiful land of long nails, silky hair, and the most even-keel mental state I’ve ever been in. I’ve never been so thankful for fluctuating hormones.*

*Please note that this state of affairs ended earlier this week. Be warned that I am back to feeling a bit of the woohoos and I’m getting zits where I didn’t think zits were possible. (Eye lids, really?!) But my hair still looks awesome!

I find it ironic that my first pair of skinny jeans are from the maternity store.

The first trimester gave me death dreams, which I believe we have discussed. Thank goodness they went away, leaving me with three weeks of normal (i.e. creatively f-ed up, wacky fun), but now we’ve got the rest of the Panics. This morning’s morale was “I feel trapped in adulthood.” Past dreams have included “no one will want to hang out with me anymore because I’ll have a baby strapped to my side”, and “I will never lose the weight I’m putting on now.” Fun times. 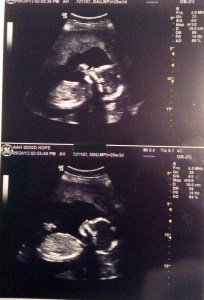 But then there’s this. And I mean…come on. Eggroll was sucking it’s thumb! If there was ever a time where “adorbs” or “presch” would be legal parts of my lexicon, this would be it.

What you don’t see here is the rolling end of Eggroll. Neither did we, but we did see the gender written on a piece of paper when we got home. Who wants to take a guess??

In the meantime I am happy to report the baby did have two arms, two legs, and four black holes that we were led to believe equals a fully functioning heart. I find out today if all is well, but all the major parts seem to be there! YAH!