I could go on for days about why I am grateful for Randy. Someday I just might. There are a biggilion and one reasons why he is the perfect man for me. But for today, let’s focus on one little fact.

I should have known good things were in my future when he didn’t squawk at finishing the basement in the old house. Actually, I think it was his idea. He also patched a few holes in the roof, rewired some lighting, and changed a faucet “just cuz”.

And then we came here.

Randy has been non-stop since April working on making this new house our home. I don’t think we have a room he hasn’t touched. He’s updated electrical outlets and switches. Put up a “fence” (i.e. 12″ plastic rabbit guard) around the yard so Noah doesn’t need a leash. He did all the demo work on the main bath and kitchen and single-handedly redid the powder room from toilet to paint to filling in an old medicine cabinet hole.

In short, he’s a really good guy to have around when you move into a new place.

To show proof of his labor, I’d like to give you a little before and after (well, almost after…I still have to do my part and organize all the Christmas stuff and old high school yearbooks…) of the utility side of our basement. 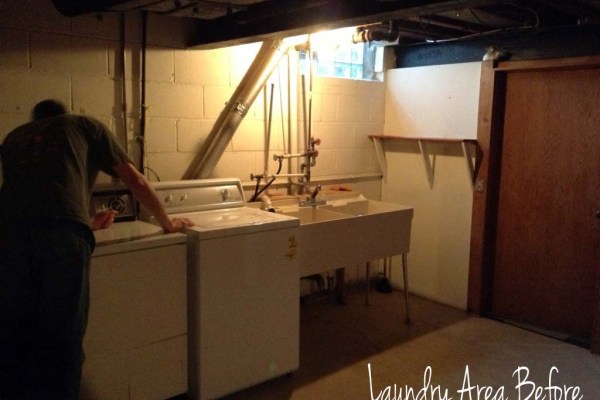 When we first moved in, there were two “closets” for storage that were lopsided and a couple of cage-like things that must have been for tools (or bad children). Almost immediately, Randy ripped those out only to find mold behind one of them. Wah wah. He then took out that drywall, did the necessary cleaning, and painted the walls and floor of the room. Yes, when I tell you we have painted all throughout the house, I’m not kidding… We’ve even done the basement. 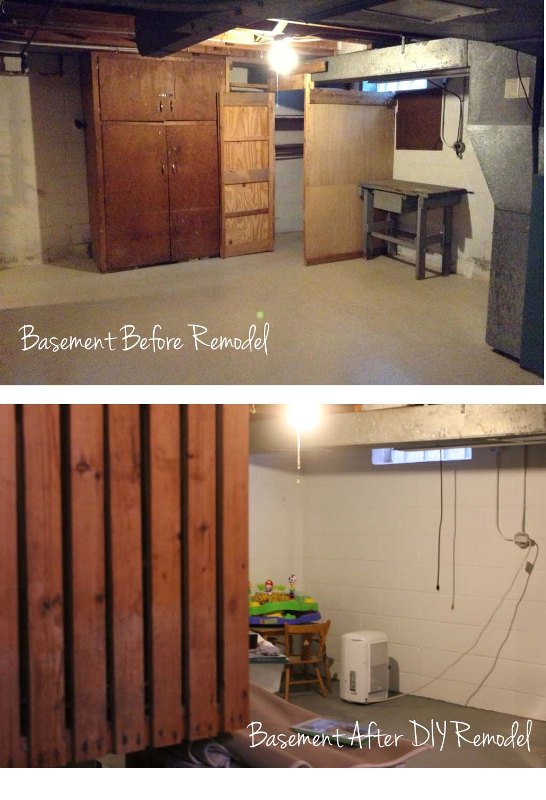 He finished this right around the time we moved in, so we promptly celebrated his work by dumping in everything that didn’t have a place on the first or second floor. Tools were everywhere, as were camping supplies and more high school yearbooks. (Seriously, how many yearbooks can two people have?!)

Fast-forward through the numerous other projects Randy worked on and all the ideas I was sending him from Pinterest, until you get to this one. See, we have a front-loading washer and dryer which is mostly awesome, but the bending over and getting to the back is difficult any day, but particularly with a baby on the belly. Though sans belly of any sort, Randy liked this idea for a washer and dryer pedestal, drew up his own plans, bought the supplies and wah la, this is now what our laundry area looks like: 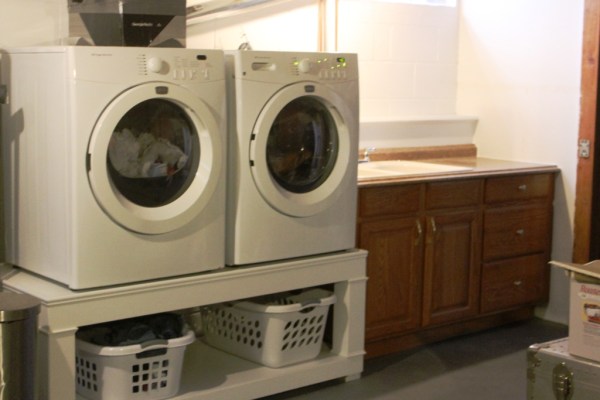 In addition to the bench for the machines, Randy also replaced the old, gross utility sink with the old sink and some cabinets that were in the kitchen before the remodel. We did have to buy a new countertop, but notice how my husband, the engineer, created his own backsplash/shelf using more decorative wood. 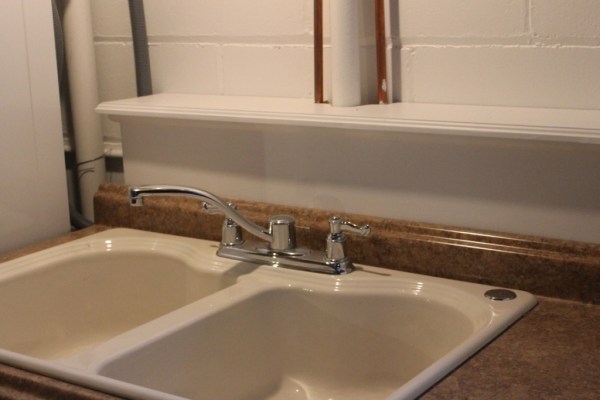 Since he can’t do anything half-assed, he also added decorative accents to the pedestal and painted with at least two coats more than I would have given that no one would ever, ever, ever see his work. 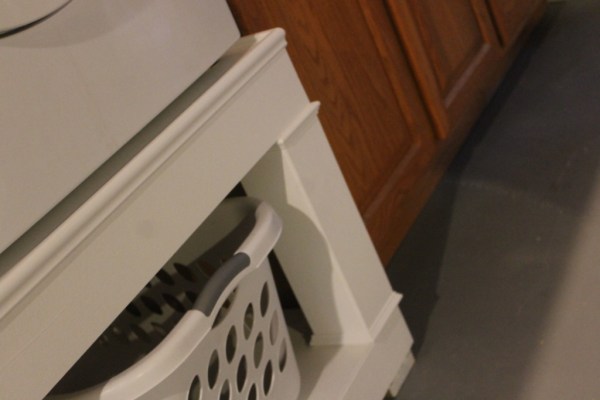 Once he got that area done, Randy next tackled shelving for the space. Two weekends, three trips to Home Depot, and a couple of back-of-the-envelope measurements later, we have this. 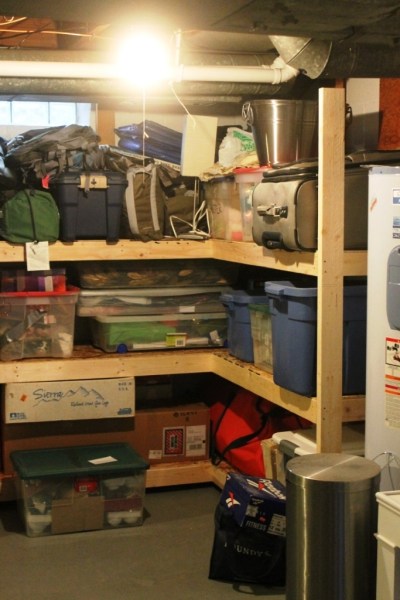 And that’s just half of it! We have a whole ‘nother wall of storage on the other side of the room, too.

I mean, come on. Who would have thought we’d be able to get all of our stuff on shelves (which we totally will once I cull the out-of-hand Christmas stock…)?! The space in the basement here is maybe the same as the old house, but we used the attic for all the Christmas stuff and never had boxes of mom’s things included.

I will never fail to be impressed by the work Randy can put out. When I would slap paint on the walls, my handy husband comes around with a delicate touch. When I would just nail together a few boards to finish the project, he measures exactly while wearing his safety goggles and appropriate footwear. And they say opposites don’t attract…

Next up is window treatments (i.e. blinds) for all the windows on the first floor and then we’ll finally get around to Eggroll’s room. This will be on both of us as there is a lot of painting to be done, but also a bunch of decorative projects. Now that’s where I’m finally useful.