Last week I promised you a recap of my Thanksgiving traditions in all of their finery. But then Thanksgiving weekend actually happened.

It was too cold and Randy too sick, so we didn’t go for a Thanksgiving morning walk like we did last year. Instead, I watched the Macy’s Thanksgiving Day parade and cried through the Broadway numbers as I missed mom during our old tradition.

I tried to “gourmet up” my traditional Thanksgiving morning monkey bread recipe so I could post a fancy recipe here this week. Instead, it overflowed on to the floor of the oven so I smoked out the whole house. (So yes, I was crying about missing mom AND shivering because every window in the house was open while Randy was coughing and hacking in a flu-like mess… It was not a good morning.)

P.S. The new additions to the monkey bread were not worth the fuss, so you will not be getting a recipe today.

We’ll ignore that I accidentally flung sautéed onions all over the kitchen while preparing a new stuffing recipe later that same morning. Noah solved this disaster, though I’m glad we weren’t around for the fall-out that afternoon. Pe-ew!

Our actual meal was perfectly lovely. We had turkey and mashed potatoes. We were with family. I only had one fleeting sad thought about dad and the canned cranberry gel. What more could you ask for?

When Friday rolled around, I bounded out of bed with excitement – it was Christmas decorating and fondue day!! A Maggie family tradition dating back through all time.

And then I left to teach my 8:30 pilates class where I about fainted from working too hard. Then I came home to show a still-sick Randy a picture of a changing table I found on the side of the road. We went back out to pick it up and hit up CVS for cold drugs and Dr. Peppers (my secret cold-fighting weapon!)

Then maybe I took another bath. And then a three-hour nap.

It was 4:30 and too late to start anything by the time I was coherent again. So instead of decorating the tree and having a fun and fancy dinner were we talked to each other like grown-ups, I worked on our Christmas cards and Randy continued on the Harry Potter marathon (seriously, was anything else on the television this weekend, because it didn’t seem to come in on our set…), and we ate leftovers. I may have made it as late as 9:30 this night.

I woke up Saturday chagrined that I’d failed at all my normal traditions. No way it could be the same holidays if I didn’t do it precisely as it was done before! Instead I thought “well, let’s just get this over with” and got laundry and dishes rolling before leaving to teach that morning. When I got home I didn’t let myself sit down until all the boxes of Christmas decorations were on the first floor.

You know what? It was THE BEST afternoon! I had nothing to do but slowly go through the decorations (including about eight boxes of stuff from mom) and watch college football. I finished up the tree just as the Alabama/Auburn game came to its spectacular conclusion, priming me for some couch time and the Carolina game.

Randy finally was feeling better. Pizza was ordered. Izzy’s were drunk. We talked to each other throughout the afternoon and evening vs. passing like two ships in the night. Beef still was not sizzling in hot oil, but it seems like the start to a good tradition in my book. Fondue may not be appropriate the next few years with a little one around anyway. But pizza and football on Christmas decorating day? That’s always a great idea! 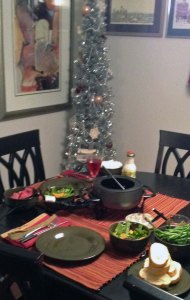 We finally got around to the fondue on Sunday night. It was fun, but I think I put too much pressure on the meal by this point in time. It’s a meal for friends, not just two people. Though I am super grateful that the other person at the table finally was feeling healthy AND I never caught his bug!

How was your weekend? Did you do things like you always do them or change up the holiday traditions this year?