Upon marrying a man like Randy, one comes to expect that he would have opinions on feminine vs. masculine roles, toys, etc. For the most part we agree – girls can do anything boys can do. That includes science, playing with fire trucks, and basketball.

But on the other hand, talking Barbie dolls in our house has become as delicate a subject as religion. Holy cats.

I dug a little deeper and found out Randy’s poor opinion of the dolls stems from the belief that they give little girls an unrealistic expectation for what they need to look like upon growing up – you know, the whole physically-impossible waistline and all.

That’s a fair assumption from a dude who never got roped into playing dolls with his sisters (or at least one who is willing to admit it), but it got me thinking… Did Barbies affect my self-image growing up?

I don’t think they did. 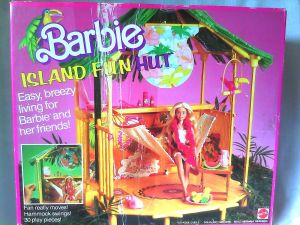 I had a decent amount of Barbies. I’m going to guess 3 or 4 with a Skipper and a Ken doll thrown in for good measure. Instead of more actual dolls, I had a great selection of clothes and two “scenes” – a Hawaiian luau set-up and an ice cream shoppe (definitely with an extra “p” and “e”!) whose diner counter turned into a bowl where you could make your own ice cream and whose stools were actually people-sized spoons. (I think we can all agree with Randy’s response to knowing I owned this toy – “of course you did”.)

In the 80s, Mattel was really pushing Occupational Barbie. I remember Astronaut Barbie, President Barbie, and Go-To-An-Office-In-A-Pant-Suit-and-Pumps Barbie. I don’t feel like my Barbies were the type that sat at home, baking cookies while secretly drinking martinis while Ken was off at work. My Barbies were busy go-getters who went to the moon by day, but could have the pig roast going at the luau by dinner time. Sure, she only wore heels and spent a lot of time on her hair, but I don’t think Barbie’s physical look defined how I wanted to look myself some day.

Now, the Jem doll on the other hand… That girl proved that even if you were a CEO of a company AND a secret rock star, you definitely didn’t want to be super tall. Remember how she would dominate over Barbies?? I wonder why they designed her so big…

What are your opinions of Barbie? Should girls of today be allowed to play with them or is it too stereotypical?