Want to make your heart swoon? Then give your significant other the newborn baby y’all produced and watch him make crazy faces and call said baby “squirmy wormy”. I dare you not to find tears in your eyes.

As expected, Randy has been the best dad ever. He was off of work for the first two weeks and then worked from home the third week, so we had a lot of time to get the hang of this as a team. Since I was in a decent amount of pain (and/or pain medication-related wooziness) that first week, Randy was a lifesaver – playing with Malorie, making us dinner, doing laundry, etc. He didn’t even squawk (too much) when I requested a very specific dinner of “toast with plum jam, orange juice with an Emergen-C, and one fried egg”. Instead, after giving me the side-eye, he made the most delicious egg I’ve ever tasted. I’ve got a keeper.

Last week Randy had to return to work, but Malorie and I sure missed him during the day. We’re able to get into more of a routine now, and the two of them get a lot of cuddle time at night. Randy and I take turns eating dinner while the other one holds the little lady (one of these days she’ll be comfortable in a bouncy seat!) and then he takes care of her the rest of the night while I get other stuff done, like taking a super critical long, relaxing soak in the tub.

We’ve split up night-time feeding duties, so Randy gives Malorie her “fourth meal” (or seventh meal, whatever…) as a bottle around 10:30 pm and I get a little extra sleep before the overnight shift. Getting these good blocks of sleep has been important for both of us. We are both going to pass Parenting 101 only because we haven’t totally lost out on our sleep. 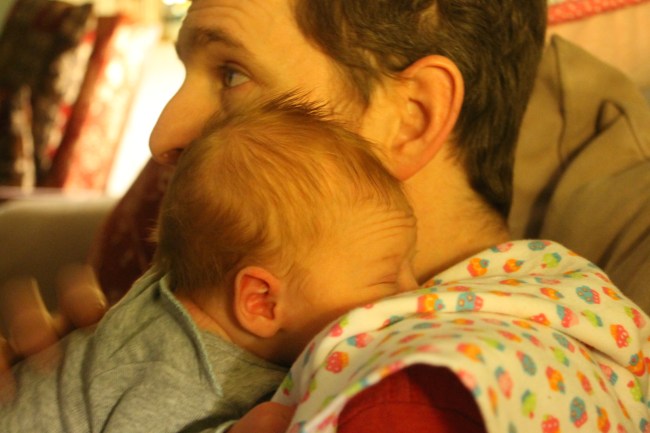 And then there is the other most important man in my life, Mr. Noah. Poor guy has done GREAT as an older brother, but I can’t help but feel bad at the lack of attention he is receiving (or not, as the case may be…). I was pretty nervous about Noah mixing with a baby. Even though he has always been pretty good with kids, I am haunted by the story of my parents’ dogs. Brandy and Katie had been with my parents since before they were married, so the dogs had to have been 10 or 12 years old by the time I came around. Even though they were such a part of the family, there was no question they had to go to the great doggie run in the sky after they tried to knock over my newborn crib. If that had happened with Noah, I would have had to give serious thought about who would have been sent back. Eggroll may be my first child I birthed, but my Noah is… well, my Noah!

Alas, all the worry was for nought. We followed the guidelines suggested via the internet; Randy brought home one of Eggroll’s blankets to put in Noah’s crate and I came in to greet him with Randy and Malorie following. We let Noah “find” Malorie himself and sniff her out a bit, too. Well, as much as he could sniff her out without getting his $hit-breath tongue on her. We aren’t going to be germaphobe parents, but we both want to wait a few weeks before introducing Eggroll to Noah’s cooties… 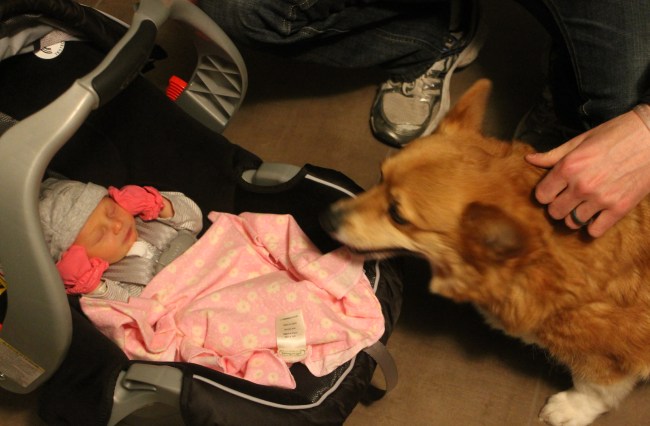 After the initial sniffing, Noah just seemed more excited to have both of us home after five days away.

When we first held Malorie while sitting on the couch, Noah would jump up, but it only took a handful of pushes and “no”s before he got bored with this game. We can still play with him while holding the baby since he can wrestle with a human foot better than a human hand. Bonus – it’s like a built-in vibration for Eggroll.

Noah is loving all the guests coming to our house and is VERY excited that we’ve already gone on more walks over the last 10 days than the last six months, so there are some benefits to having the screamy thing in the house. Thank goodness they both can sleep through the other’s loud noises, otherwise none of us would ever sleep again! 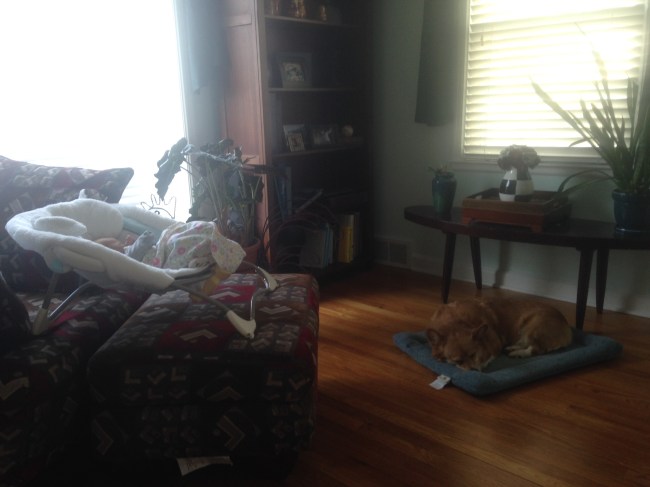 Though he tries to act nonchalant about the whole thing, every now and then I catch him standing guard for his Malorie. They do have the same hair color, so it’s not too hard for him to believe that she’s his sibling. 🙂 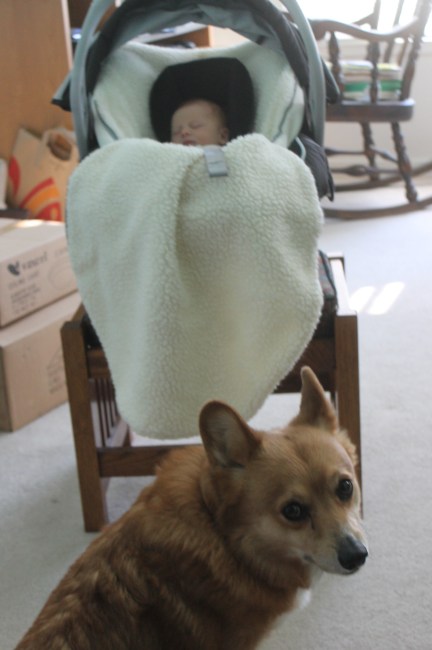 My family of three became a family of four just as naturally as could be. Have I mentioned that life is good? Because it is. 🙂