We got a lot of stuff in preparation for Eggroll’s arrival. I mean A LOT of stuff. Three months into this, I think I can confidentially say what was valuable and what was not. (I’m talking to you, 8,000 receiving blankets and you, organic cotton sheets for the bassinet we never used.)

Here are six things that will make every new mama grateful to have on hand.

Heaven forbid you end up needing this wrap after a C-section, but if you do, you’ll want it immediately. I guess some hospitals provide a wrap, but mine just gave me a small pillow and said “don’t sneeze too hard.” Jerks. Thank God for a wonderful friend who suggested a belly wrap and another who went out that first night and bought me a couple of options.

This one from A Pea in the Pod 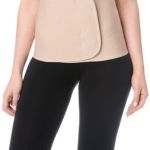 worked perfectly. I wore it over my pants for the first three to four weeks. I’m not sure if it really helped squeeze everything back together, but it did help push out the extra water retention, cushioned the muscles around my incision, and protected my lower back as I got back on my feet.

I’d recommend getting two sizes and keeping the receipt. You will probably be sorely disappointed with how little girth you lose immediately following labor, but in a matter of a few days things will start getting back on track. If you can secure the smaller size at all right off the bat, just use that one.

Friends suggested I stock up on nursing tanks. I got a handful and they are nice, but I can’t really wear them out of the house without a bra underneath, thusly defeating the purpose. 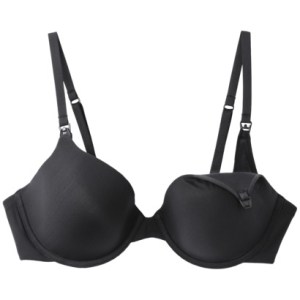 I only got two nursing bras, which is probably about four too little. (Seeing as we do laundry at least once a week now and there will be at least one day per week that you won’t get out of pjs.) I don’t necessarily wash my regular bras after every use, but if used right, these guys will need it. No matter how many burp clothes I stick in there, there still is leakage. And, let me tell you – nothing sends shivers down your spine like unsticking a nipple from synthetic fabric.

Yep, I went there.

Save yourself the boob pain and get a handful. Target has a cheap version for around $17 that provides good support and thickness. Save the nursing tanks for your days hanging around the house and use these bras whenever you don’t want to scare the neighbors.

(Side note – If you aren’t nursing, no worries. You feed your baby however works for you and be thankful you don’t have to put up with a lot of weirdness in this arena. And wear a regular bra and a turtleneck for me, OK??) 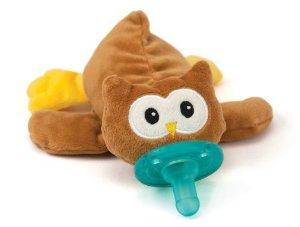 We said we would never be Those Parents. You know, the parents that weren’t strong enough to let their kids cry it out and instead turned to a pacifier. We even fought the nurses in the hospital who suggested a pacifier might be just what Malorie needed to settle down enough to sleep. Pshaw… She’ll be fine.

48 hours into the little lady’s life, we gave in and haven’t looked back since.

Girlfriend is so much happier when she has something to suck on. For two months we kept the pacifiers on a little leash clipped to her clothes or the car seat. Then a friend suggested the Wubbanub. I was really worried that adding a toy to the pacifier would make it even harder to get rid of someday, but as another mom at Kid Care said when I asked about this concern, “we’ll cross that bridge when we come to it.”

The beauty of this thing is that it is heavy enough so it lies on Eggroll’s chest as she squirms and doesn’t fall out as often. When it does fall out, the toy gives her enough to grab on to that she can sometimes get it back in her mouth without me having to intervene. It was fine for me to do the first 8,000 times the regular pacifier fell out, but man, this is a time saver. I think it gave me back at least a year of my life that was going to be lost in 2 second increments as I chased after the fallen Nuks. 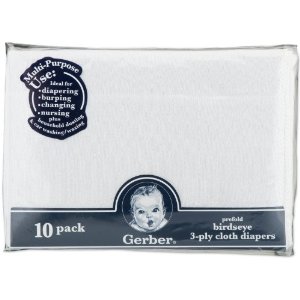 We registered for (and received) the adorable decorative burp cloths covered in pink polka dots and brightly hued cupcakes. They look great in the diaper bag and artfully arranged on the Boppy. But when it comes to usefulness, well, I might as well be using a paper towel. They don’t soak up anything!

. They may not look pretty, but these bad boys can sop up a whole feeding’s worth of spit-up and still feel dry to the touch. As a mom who is still icked out by bodily functions (yep, even three months into it), these are worth their weight in gold! 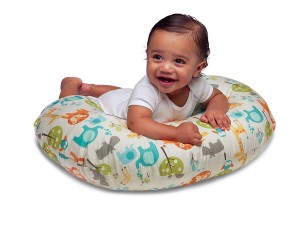 Put this one in the #Firstworldproblems category, but it would have been really annoying to have to haul the Boppy up or down stairs depending on where I wanted to feed Eggroll next. We were given a hand-me-down Boppy in addition to a new one from our registry so we are able to keep one in her nursery (where we do the overnight and most of the weekday day feedings) and one in the living room (where I feed her when I want to watch TV).

This has led to my inability to comfortably nurse Eggroll without a pillow underneath her, but my wrists are so much happier with these support devices in both places. My wrists may have fallen right out of my arms without them. Seriously, who knew new mama carpel tunnel was a thing?!

Craigslist is chock full with people trying to unload Boppys. Buy one off of there for your secondary location and get a new cover if you’re not comfortable with used.

A Freezer of Meals

Ok, so this isn’t really something you can register for (or is it?!), but having a stock of ready-made meals was a lifesaver in that first month or two. I love to cook and even busted out some gourmet French toast that first week when Randy was still home and could watch Eggroll, but it was nice to have at least one of the casseroles on the weekly menu.

Before Malorie I would never have believed that this could be such tiring work. I mean, all you are doing is feeding a baby, changing diapers, and (at that point) holding her as she slept. It’s not like I was working in the coal mines, but my lamb, by the time dinner came around, I just did NOT have any energy. Instead, I would just pop in one of the seven or eight dishes I had stocked in my freezer and dinner was ready to roll. 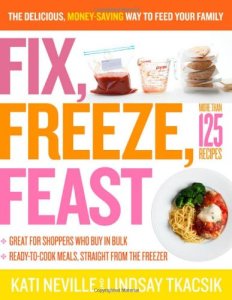 Since I do like to cook, this was a good “I’m Still Waiting for the Baby” exercise. I used Fix, Freeze, Feast: The Delicious, Money-Saving Way to Feed Your Family

cookbook for most of my recipes. Their asparagus frittata is so good! I made large batches of enchiladas, egg casseroles, spaghetti, and turkey and stuffing and split them up into disposable, oven-safe trays. I wrote the cooking instructions right on the aluminum foil that covered them. See – pretty much no work required come dinner time.

If you don’t like to cook, perhaps you could suggest this as an option to your friends and family. I had a great friend come out of the woodwork to give us a huge batch of beef enchiladas. We ate off of that for like a week! Talk about the perfect present.

The cute clothes are nice and the sweet smelling lotions are a pretty touch, but you really don’t need a lot with a newborn. Some warm sleepers, a mama’s embrace, and a big ole stack of diapers could easily suffice. These things I’ve listed above were just the icing on my cake.

Other mamas – what could you not live without for the first three months of baby’s life?