Leading up to vacation, I had a lot of worries about traveling with a seven-month old baby. In the end, it was a lot more fun and easier than I expected. Here are few tips to put your mind at ease.

Every single person we ran into commented on what a happy baby Malorie is. Are other babies grouchy all the time? I knew she was a ham, but boy did she create a fan club this last week! She was flirting away with every new face she ran into. This was helpful. She didn’t really cry or get fussy while we were out in public much. Instead it was more loud baby banter. People would turn around to see who was making such a ruckus and before they could glare at us, she would show off her charm. Problem solved.

So, um… maybe figure out guaranteed ways to make your baby giggle before you leave in case Grumpy Grumperson falls apart in confined spaces?!

I’ll admit I felt like a sucker when I originally picked up this necklace at Buy Buy Baby. Who spends $30 on a string of plastic beads? This girl, that’s who. I thought this Chewbeads necklace would be good for the plane, but I ended up wearing it everyday. It’s a built in toy, distraction, and teething pain reliever AND one less thing you have to carry in the diaper bag. I’m not sure we’ll use it much when we are just out running errands, but it was great for the long trip. It kept her busy at restaurants, while she was in my arms, and particularly when we got into cranky time on the plane. 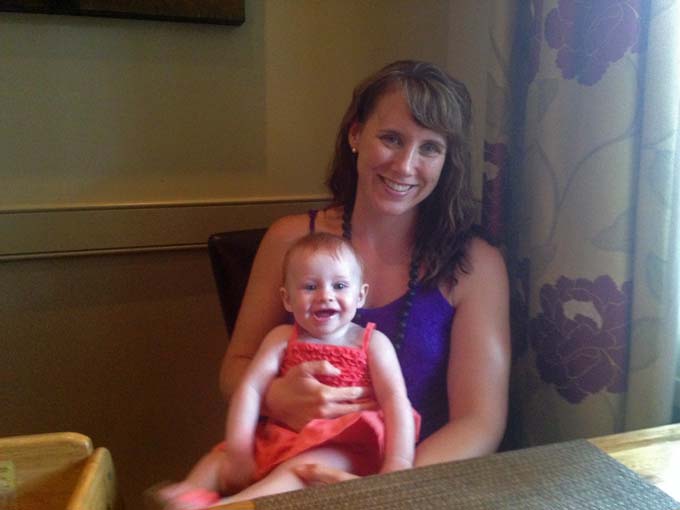 You’re throwing away money on much sillier things in these first few months of parenting, I promise.

Packing for nine days away was a trick when it was the two of us. Now that we have to make space for three and #3 needs diapers, food and entertainment, we ended up taking our two biggest suitcases, a diaper bag and backpack (and carseat and stroller…).

It would have been even worse had we taken enough outfits to get us through the week. Instead, we only packed enough for each of us to get through about five days. Our hotel in Columbia had laundry, but we were able to wait until a quiet night at the condo and did a couple loads there. This also meant we only had to take one sleepsack, two pjs, and two small blankets. 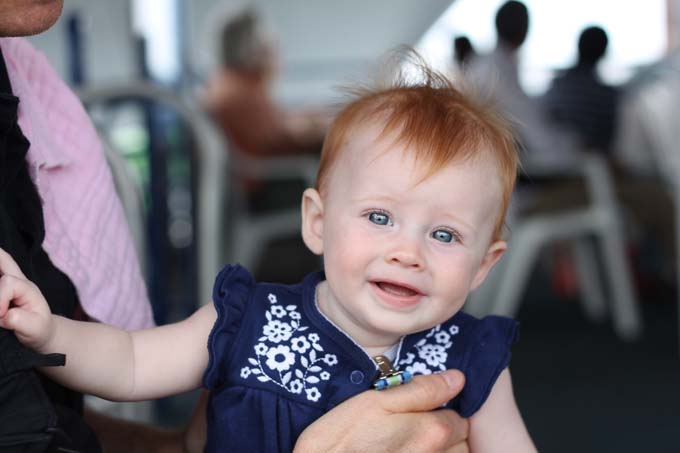 Caveat-we did use a baby supply rental store for a crib, exersaucer, and beach umbrella. I think we could have gotten by without the exersaucer, but it was nice to keep her in there when we both were busy doing something else besides watching her. We brought our own high chair since it is compact.

4. Go where you have a trusted babysitter for at least one baby-free outing.

We started the vacation almost baby-free with a full day away for the USC football game. My girlfriend had her babysitter come over and watch Mal at her house. As I mentioned yesterday, another friend watched Malorie so Randy and I could have one grown-up dinner the next evening.

Looking back on the week, I think these two events were critical. By the end of the vacation, I think we all (Mal included) needed a break from each other. Had we been on 24/7 baby duty the whole time, I don’t think we would have come home as relaxed as we did.

When I first had Malorie a girlfriend told me that Randy and I needed to take care of each other first, Malorie next. This makes so much sense to me… If we aren’t supporting each other, neither of us will be good parents to her. These two outings away allowed us to do just that and remember what it is like to just be a couple, not mom and dad.

When I originally packed, I kept on wanting to add toys. She needs something that makes noise. She likes how that one squishes. She plays with this one in the morning, that one in the afternoon. She needs a variety of books to keep her interested.

Nope. Turns out she didn’t need more than the five small toys and two books I packed. In a new world of cords, carpet, sand, and pillows to explore, we probably could have gotten away with even less. I didn’t bring anything that lit up or made music. Just Sophie, a teething ring, a rattle, a plastic ball thingie, and a soft book-like thing was all she needed (in addition to the necklace mentioned above.)

I had an app on my phone ready to entertain her, but she never really needed it. For as much as she likes looking at the phone when we take pictures, she gets distracted easily from her Baby Giggle game. I’m OK with that.

We did bring our baby bjorn which was handy when a stroller would have proved cumbersome. Eggroll is OK with this for about an hour or so if you are standing. Make sure your baby can handle it before you go. Go for a walk or two to test out your carrier. Mal used to fall asleep in it and stay there for hours, but now was alert as anything. Had she been unwilling to go in it at all, it would have been wasted space in the suitcase.

This might just be Eggroll, but I think there is some scientific merit* to flying with a baby earlier in the day. Our first flight took off at 6 am. On the way home we left at 7:45 am. She typically wakes up for good (after 30-60 minutes of rolling around in her bed making noise) around 7:15. On travel days, we got everything else ready and packed in the car and just transferred her from crib to carseat as quietly as possible. She was awake then, but just taking it all in.

We got to skip security in Milwaukee and Charleston’s was pretty quick, so we were at our gate before it was time to get dressed. I changed her clothes and diaper while Randy got water for her bottle. This left us with just a few minutes of “what the heck are we doing here and WHERE IS MY BOTTLE???” fussiness before boarding and feeding her when we took off.

After her bottle is usually her happiest time and these days proved no different. On the way home she was able to sit in her carseat on the first flight so she fell asleep. (Sidenote: if gate agents try to tell you that your carseat needs to be airline approved, they are either 1. jerks or 2. don’t have a clue. We had the whole back of the plane to ourselves going down to Atlanta, but they wouldn’t let us use our seat. No problems with it coming home…)

Each of the four flights were about an hour and a half long, so we were able to keep her entertained with “new” things throughout. I took a walk with her in her stroller during layovers which led to a little doozing. Mr. Peepers or her pacifier on a string were never too far away.

*By “scientific merit”, I don’t actually mean there are facts to back me up. Instead, I just suggest that I’m pretty sure I’m right. ;P

6. Stop stressing. It will be fine.

I’ve got to admit, I wasted A LOT of time before our trip worrying about the details of traveling with an infant. In the end, it was perfectly fine. We didn’t see all the things we wanted to see. We didn’t get to eat nearly as many neat places as we would have before her. (Bonus tip – go to the fun and fancy places for lunch. It’s more casual then, so babies should be OK at that time. Do call ahead and ask if you are concerned.) We didn’t sleep late. I only read one book vs my normal three. But we had a ton of fun and more than enough supplies. Besides formula, everything could have been purchased if necessary and in the end we didn’t need much besides baby food.

Plan out your outings around baby’s schedule. For us, that meant feeding her and ourselves first thing upon waking up. We’d then play with her for a bit before exercising, showering and/or watching a movie (FREE HBO!!!) while she had her first nap. When she woke up, we’d quick give her a bottle and then head out for lunch and the main activity. A couple times she fell asleep for her big nap while we were out, but mostly we had to return back to the condo by 5:30 or so. Girlfriend can’t sleep when there are new things to see! We went back to the beach before her night time routine. Randy did that while I made dinner or picked up. Our dinner was after she was asleep for the night.

Since we worked around her, we were still able to do what we wanted while keeping the crankiness to a minimum. Well, on her part. I make no excuses when it’s 4 pm and I haven’t had a nap. I thought we were on vacation!?!? It’s a rough life, I tell ya.

Enjoy these special moments with your little one and spouse. The time goes by way too fast!