Monday, man. Monday was a rough one. I’m not allowed to panic (anymore) yet until we take a blood test and get results, but all signs are pointing to bad news for Noah. Only I could turn an innocuous voicemail from the vet about reasons he doesn’t walk straight into a full-fledged, laying on the floor in tears, come-apart, and I… well, I did with with a flourish.

In short, Noah might have a fatal disease in which his a$$-end is going to quit working. Sure, the important things like elimination systems would fail sooner or later, but first, literally his butt muscles would atrophy. It’s genetic in Corgis. I think it’s because they are a rudderless vessel their whole lives since they barely have a tail. The hip muscles have had to work too hard to keep the ship on a straight path, so of course they are going to go out first.

If dude doesn’t let me strap a doggie backpack near the nard-less region, I really don’t think this is an option for our future: 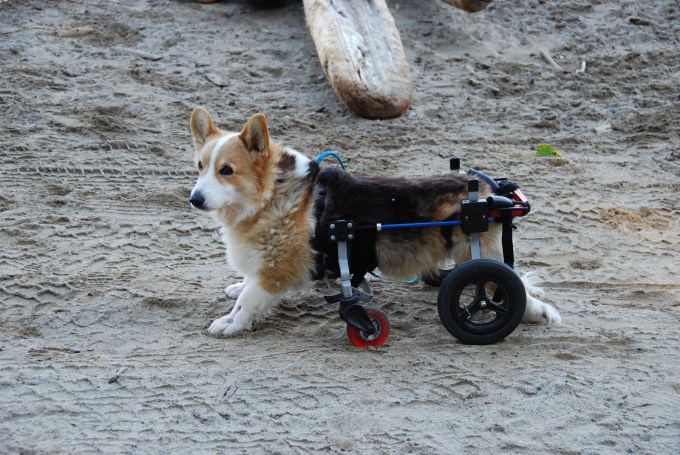 (Editor’s Note – OMG. #Wheelcorgis is a thing. Proof that corgis are the best – even their most disease-stricken, sad pictures are adorable! Google it!)

Monday night, I cried. Hard. And you know what happens when I cry hard? Noah gets all up in my Kool-Aid to stop the tears. So I’m crying and petting, crying and cuddling, crying and picking fur off my clothes and then I realize that while wiping tears out of my eyes, I managed to smear doggie dander all up in there. Now I’m sad and my eyes are puffy and I can’t see. And of course we have no Visine.

I don’t sleep much Monday night because Sad Panda (and eye issues…). Randy takes off for a long trip and I get Mal ready for the day. We barely get to daycare on time because I suck at clocks, so I’m screaming down to work. As I walk in the door, I think “boy, people better be nice to me today; they don’t know what I’ve been through.”

Then, because the Fates need to remind me that I am not a princess, I walked into everyone else’s real life. They aren’t my stories to tell, but there are personal health issues and sick parents. Broken machines and grocery lists that can’t seem to get purchased. Super snappy retorts and passive aggressive comebacks. In short – I’m not the only one with crap going on.

Three days later, I can focus enough to see the lesson here – you never know what’s going on in another person’s life, so don’t jump to the defensive. And always keep Visine in the house. How’s that for “yoga off the mat”?

P.S. We are taking Noah for the blood test next Monday. The doctor says it takes three to four weeks to get the results. Besides a weird stance, Noah is perfectly fine for now. Able to play fetch, eat like a pig, and be the best dog this woman could ask for at this time of her life. I’d ask for a prayer for a canine Christmas miracle, but you’ve probably got your own issues to focus on. My thoughts are with you as you struggle with real life – the good, the bad, and the puffy-eyed ugly.