Read any good books lately? I’ve been in a bit of a rut the last six weeks and need a list of good ones. My uncle recommended Ken Follett, so I’m currently reading Night Over Water. I’m only 35 pages in, but it seems like it might be a winner. Fingers crossed. 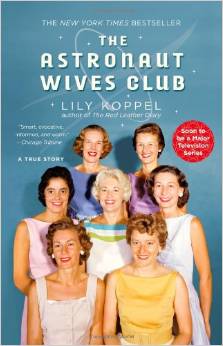 The last good book I read was The Astronaut Wives Club: A True Story

Here is an excerpt from the book’s description:

As America’s Mercury Seven astronauts were launched on death-defying missions, television cameras focused on the brave smiles of their young wives. Overnight, these women were transformed from military spouses into American royalty. They had tea with Jackie Kennedy, appeared on the cover ofLife magazine, and quickly grew into fashion icons.

Annie Glenn, with her picture-perfect marriage, was the envy of the other wives; JFK made it clear that platinum-blonde Rene Carpenter was his favorite; and licensed pilot Trudy Cooper arrived with a secret that needed to stay hidden from NASA. Together with the other wives they formed the Astronaut Wives Club, providing one another with support and friendship, coffee and cocktails.

As their celebrity rose–and as divorce and tragic death began to touch their lives–they continued to rally together, and forming bonds that would withstand the test of time, and they have stayed friends for over half a century. THE ASTRONAUT WIVES CLUB tells the real story of the women who stood beside some of the biggest heroes in American history.

As I mentioned earlier this year, Randy got me into all things Space Race late this summer. Somehow, I stumbled into this book around the same time we were watching the From the Earth to the Moon mini-series and just couldn’t read it fast enough. I’m fasinated by how these women lived and what they were required to do per the government, their husbands, and pop culture of the time. Did you know Life Magazine had an exclusive contract with them so no one else could interview them without Life’s permission. Can you imagine what that would go for today? Biggilions for an exclusive on any Kardasian, I’m sure.

The book is a very easy read of nonfiction and includes a handful of pictures of the ladies, their families, and their homes which I can’t find anywhere on the internet.

As an added bonus to my fellow Pius XI alum, I was just googling the TV show version (yes, it’s going to be a TV show in 2015!) and our very own Joel Johnstone plays one of the astronauts. How have I missed that Joel has a pretty established career? Yah, we know famous people!!