If my mom were still around, she would call this week’s class the “garp up the plate” class. You know all those delicate drops and fancy brushstrokes you see on the plates of white tablecloth restaurants and the final scenes of PBS-type cooking shows? Yep, that’s what we learned about this week and it was ah-maz-ing. 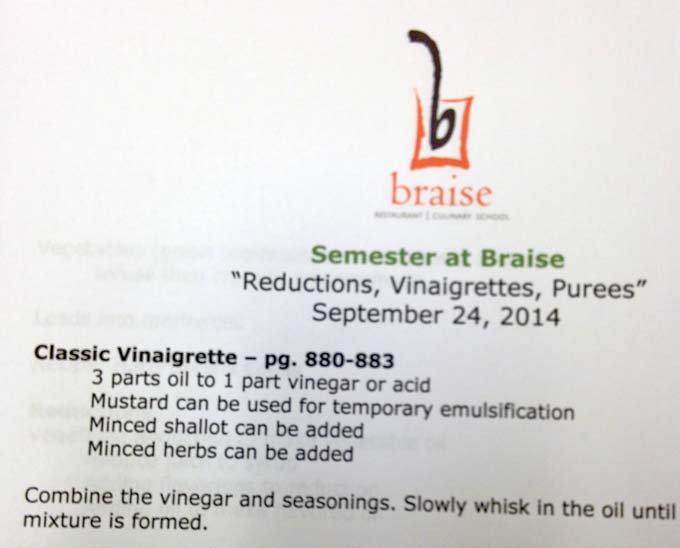 Show of hands – who has had homemade mayonaise before? Keep your hand up if its kept you from ever buying the jarred stuff again. My hand is still raised. After last night, I don’t think I will buy mayo, salad dressing or premade marinades from the grocery unless I’m in a bind. They are so easy to make and the flavor… OMG, the flavor. Wow.

A vinaigrette is basically a temporary mayo since it does not stay emulsified. What does that mean? You have to shake your salad dressing bottle each time you use it, right? Do you have to do that with mayo? Nope. 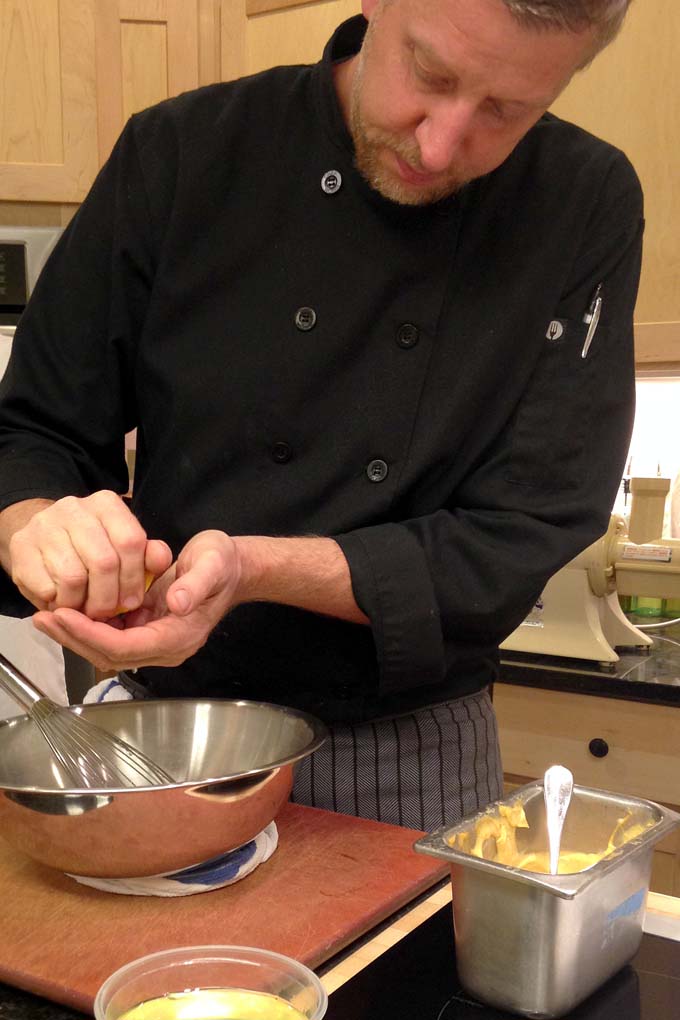 To make a vinaigrette, you use three parts oil to one part vinegar or acid (like lemon juice). Mustard can be used for temporary emulsification and to give the sauce more flavor. Also consider minced shallots*, herbs, or any additional reductions (see below), crumbled cheese, or flavorings you typically enjoy. Dave suggested a vinaigrette using bacon fat in place of the oil. Yum. I might try that on my next spinach salad.

*Shallots are typically used in place of garlic since this sauce isn’t cooked. The flavor of a shallot is more mild than garlic and “let’s the other ingredients speak for themselves.” 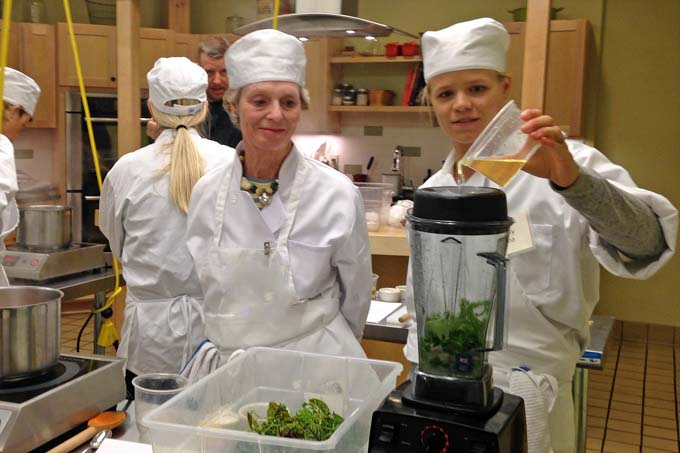 A loose vinaigrette is a sauce that never fully incorporates. Every culture has a green sauce that fits this category. Think salsa verde, chimichurri, or as we created, herb vierge.

A reduction is created to add flavor to a vinaigrette, marinade or sauce. It takes a lot of product to make a small amount of reduction, but it packs a whollup of a flavor punch. As an example, we created a red pepper reduction by juicing 10 peppers to create around 2 1/2 cups of juice.  From there we simmered the juice to syrup consistency which probably left us with only 1 cup of product after 20 minutes of cooking. This syrup was added to vinegar and oil to make roughly 2 cups of red pepper oil, which is more than any one person could use in the relatively short amount of time the sauce will stay good (5 days or so.) I’m thinking about using my leftovers over grilled shrimp, veggies and pasta this weekend. What else would be good???

(P.S. Many thanks to my friend Penn for tipping me off to Fabian Brothers Seafood. Excited to get a few pounds of gulf shrimp from them this afternoon!)

The term “coulis” is one of those terms thrown around on shows like Top Chef where I feel like they don’t know how to use them properly. It seems like this one is used any time there is a fancy sauce decorating the plate. I thought coulis was French for “garp up the plate”, but in fact it should be used whenever you have a puree + oil. It’s that simple. Here, think about raspberry coulis on a chocolate cake or herb coulis drizzled over a piece of grilled chicken. 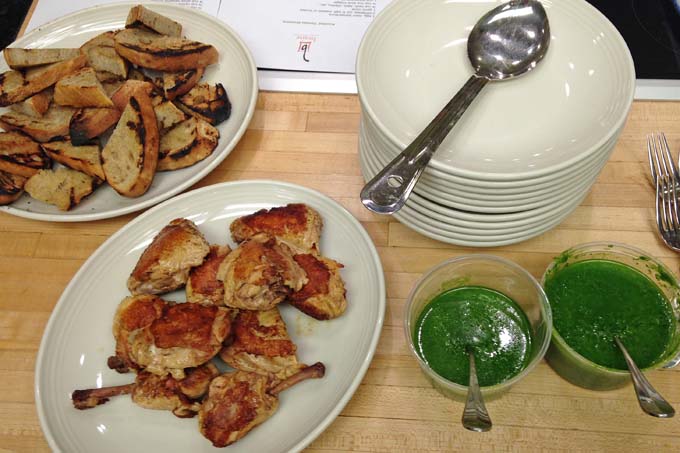 In my opinion, this is the least oily of the sauces we covered in this class.

A good mayonnaise won’t break like a vinaigrette. Instead, it holds an almost pudding-like consistency making it perfect for spreading on sandwiches and as a base for dipping (think garlic aioli, tarter sauce, and remoulade sauce.) 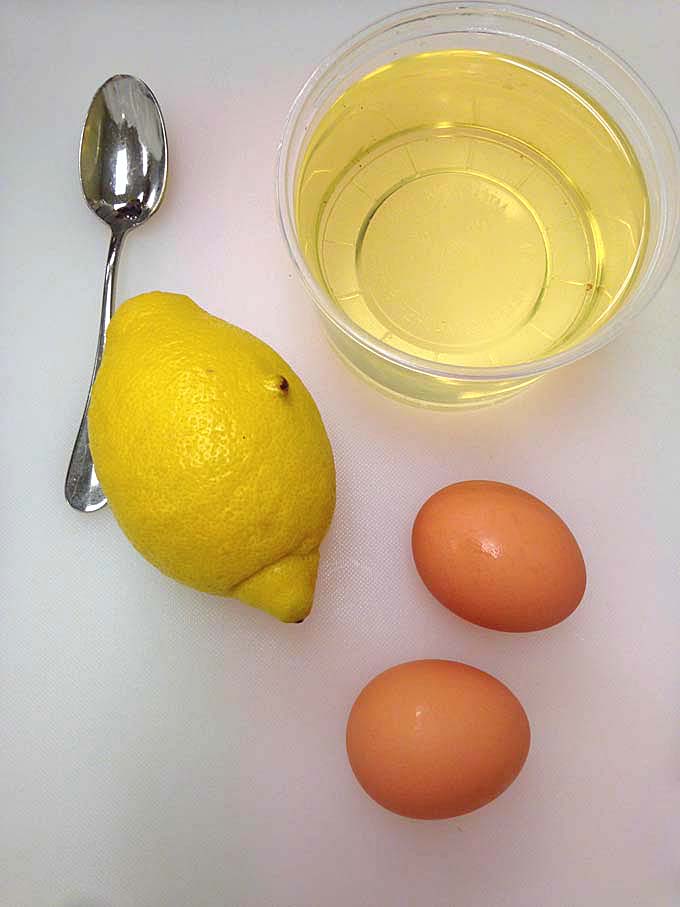 We made our own mayo in class. From start to finish, including collecting the ingredients, it took around 8 minutes and that’s mostly because I have weak biceps. It was so quick and when you think about it, much cheaper than the bottled stuff. We were able to bring home our work, which I gave Randy to taste test. At first he turned his nose up at the idea of a finger dip of mayo, but after he tried it, he couldn’t believe that’s all it was. So good! We are definitely having BLTs this weekend. Last night I used some to roast potatoes and other root vegtables. 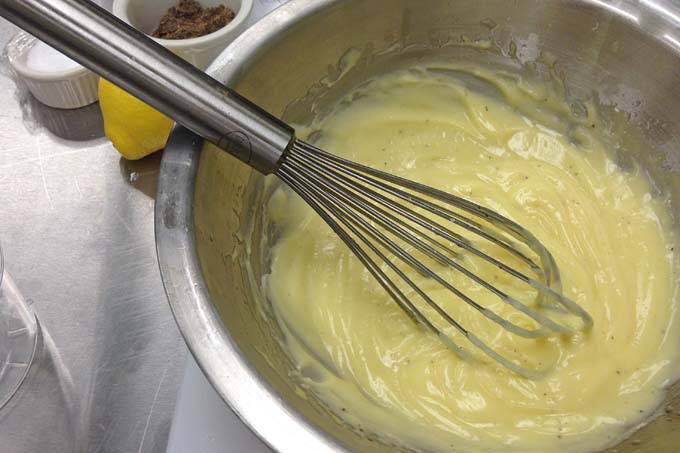 If you are in a big rush or have a broken arm (if I can whisk long enough to make mayo happen, a broken arm is the only thing that should keep you away from it!), you can use a blender, but keep reading on to try your hand at the real deal.

Pro-tip: Dave suggested we invest in grapeseed oil or GMO-free (which might be a trick to find) canola oil for all of these sauces. You don’t want the flavor of the oil to screw up the flavor of the sauce. I didn’t quite understand the science, but he said nut oils or olive oils may break down during the emulsification process leaving you with a sour sauce. Hmm, maybe I finally have something to buy from Wildtree after all. 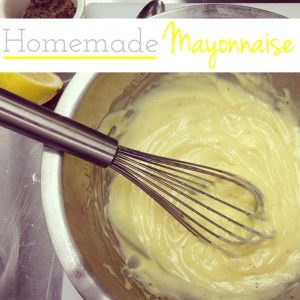 This recipe makes over two cups of mayonnaise which is more than any household should consume in the amount of time you have before it goes bad. (Though it will technically be OK for up to a year, the flavors start to fall apart after 5 days.) Feel free to half the recipe if that makes more sense for you.

Hopefully these descriptions helped make homemade vinaigrettes and mayonnaise-like sauces more approachable for you. The class definitely did that for me. If you see me at the gym only lifting weights with my right arm, you should ask if you can come over for dinner. This is a sign there is a good sauce waiting in my kitchen!