(First off – sorry for the bad pun, but I feel like I had to do something with that word! Ahem… )

Week 6 at Braise was all about veggies and grains which are, in my opinion, the unsung heroes of the dinner table. If I cook five nights out of the week, I probably only make one or two meat dishes. This means my menus can get a little stale from doing the same thing over and over. And even with all that vegetable cooking, I still find myself with a half a bin of unused produce right before it’s time to go to the CSA for more. 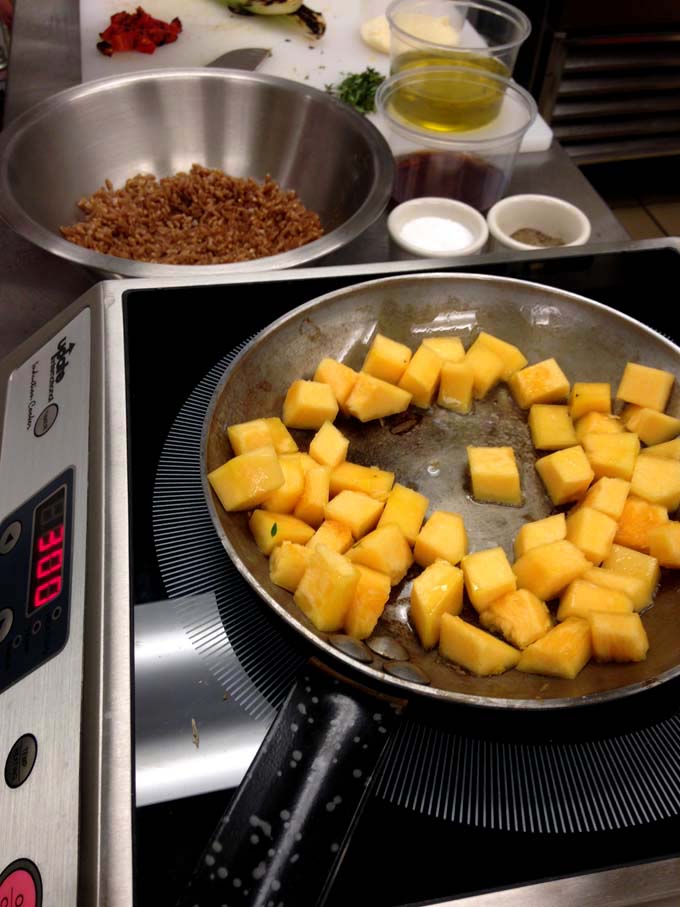 Enter this great session where I learned the basics of cooking methods I thought I knew and those that were brand new to me. We learned how to blanch, which is good for green and/or tender veggies. Of course there is the standard roasting (great for the root veggies out now!) and sautéing (green beans, asparagus and corn are good here) and how to create a quick pickle. 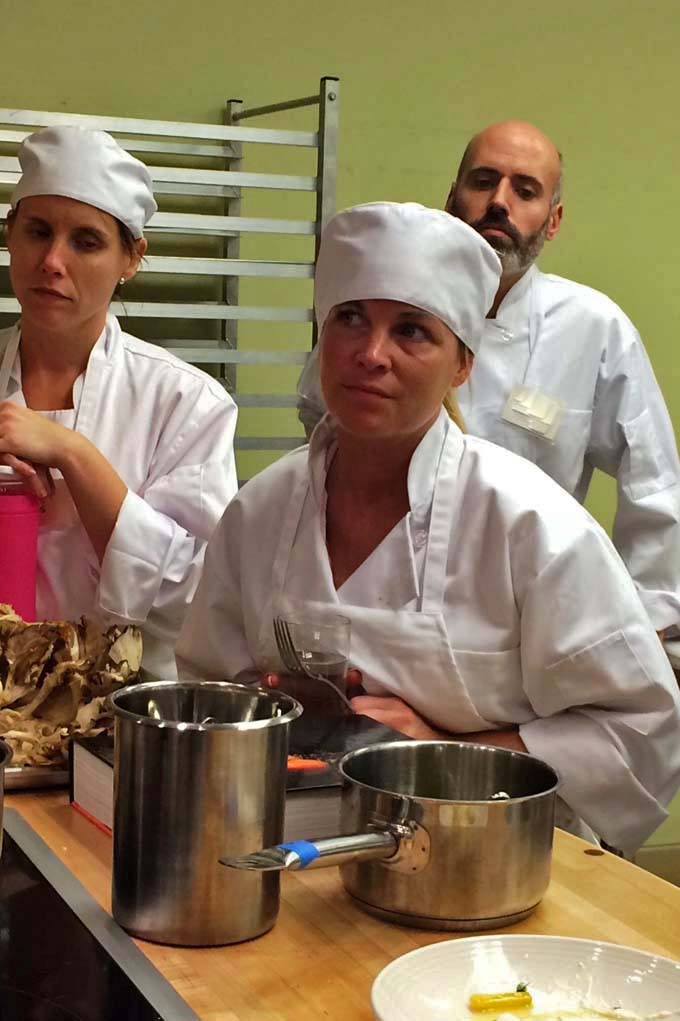 We also talked about grilling. Chef Dave suggested grilling vegetables I never would have considered, like whole leeks or heads of broccoli sliced in half. The key to successful grilling is to have a hot and clean grill grate when you put the product down. Also, only use a wee bit of oil for dryer vegetables. Moist items like eggplant don’t need it.

Pureeing is an obvious choice for many vegetables, but they can sometimes end up a little weird texture-wise. Add a couple small potatoes, chopped the same size as the main veggies to your boiling water to make the final puree smooth, no matter what the main ingredient.

Finally, the method that blew my mind this week was poaching. When I think poaching, I think really bland chicken breast or icky looking cooked egg. No longer. Now I’ll think about the richest vegetables and savory fish. Chef Dave turned us on to poaching in liquids besides water; instead using things like olive oil, which we used for a rutabaga, carrot, and beet dish during class. 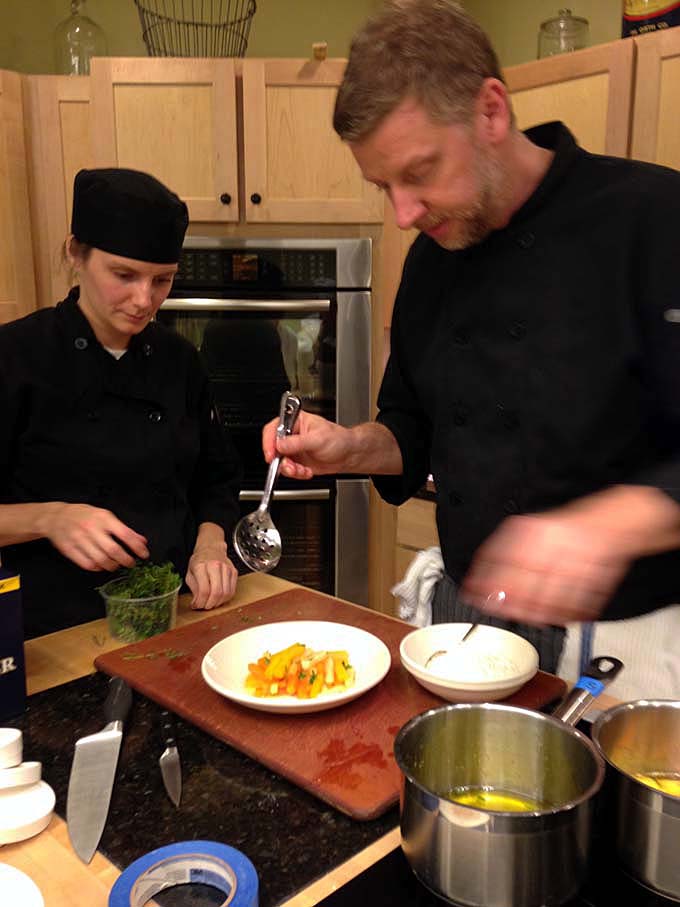 Talk about smooth! The oil makes the vegetables soft and silky without becoming greasy. These were paired with a tangy horseradish crème fraiche dipping sauce that was amazing. 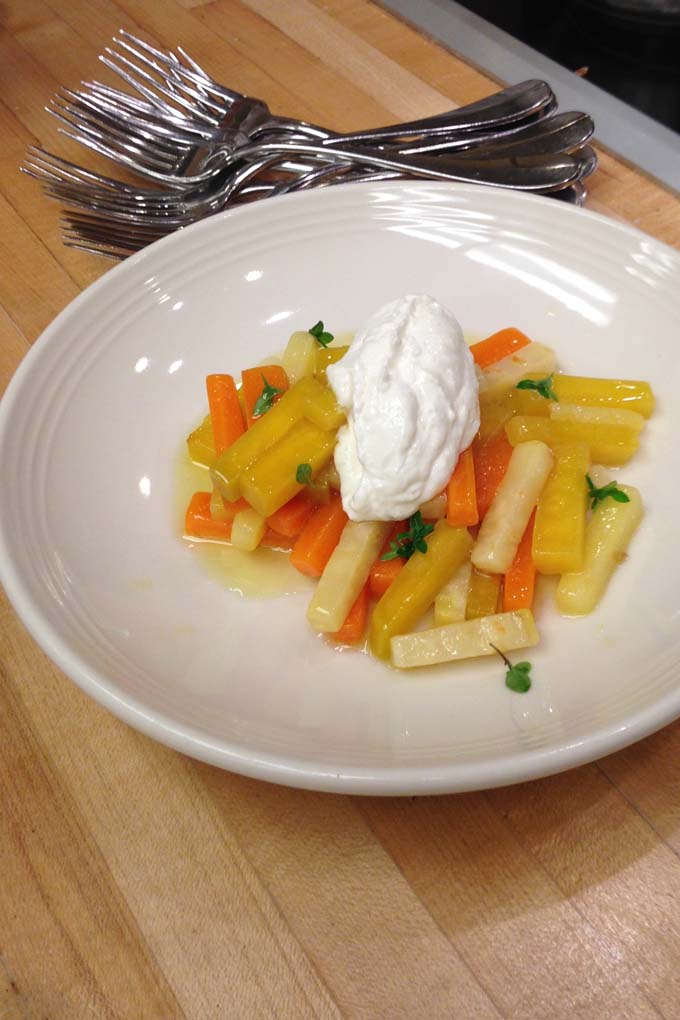 The olive oil can be stored and reused to do similar dishes or as a good base for a vinaigrette. We used a little drizzle over a mushroom risotto we made later in class. Oh… So… Good…

(Side note – did you know you can make a risotto with any grain or small diced potato?? We made it with traditional arborio rice and three kinds of mushrooms. I’m not a mushroom fan, but this was great!) 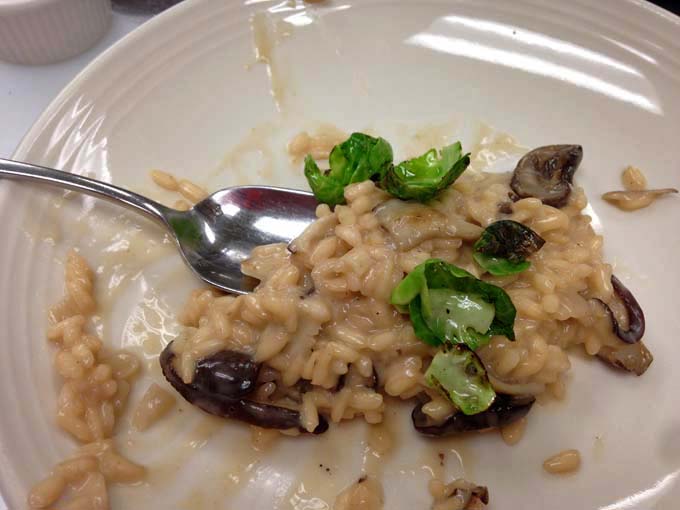 I’m a hip cat in the foodie world, so I’m familiar with quinoa and wheatberries, but farro was new to me. We made a dish using this grain and several different methods to cook vegetables that was a simple, perfect side dish for dinner or main dish for lunch. 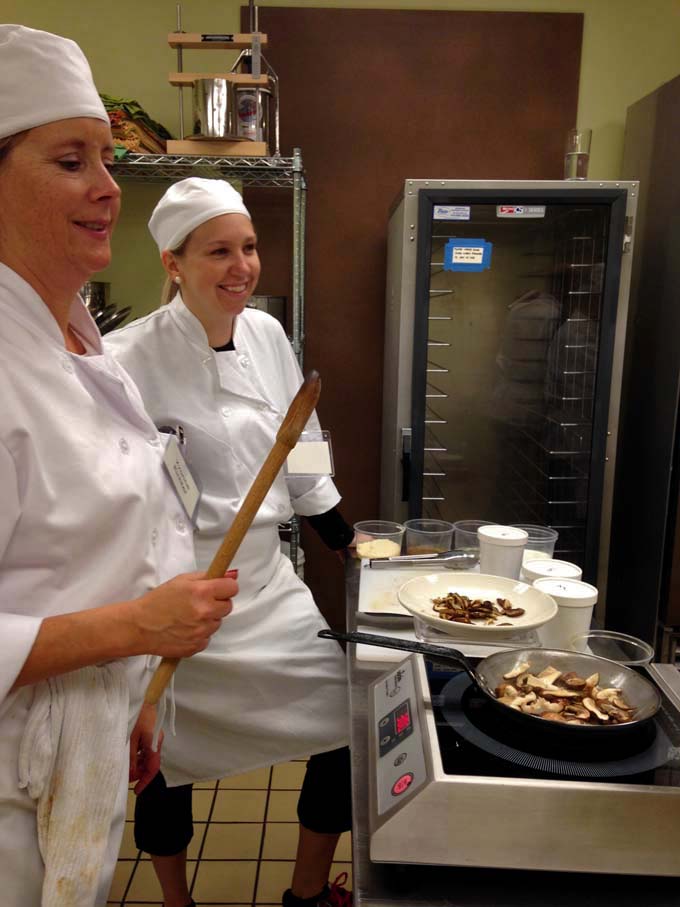 I would call it “winter light”. It was very comforting, but not too “stick to your ribs.” Farro has a nutty taste and is served with a little bite left. My goal leaving this class is to play with this grain more at home, perhaps even trying a risotto-type dish with it. In the meantime, here is the recipe we learned in class which will become a staple in my repertoire. 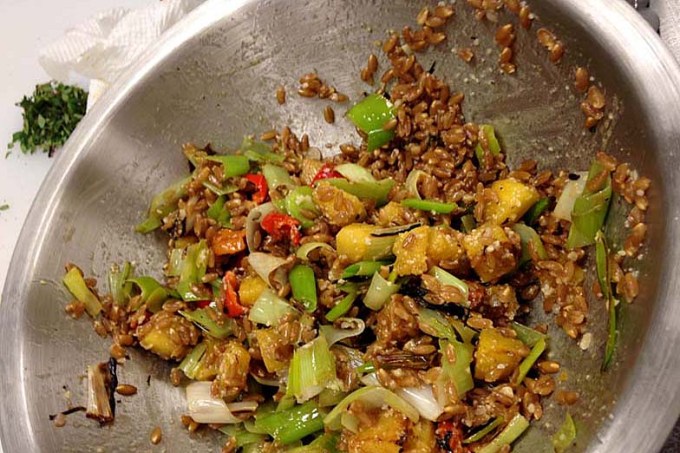 Farro Salad
Per the rest of the lessons from Braise Culinary School, consider the vegetables and spices as suggestions. Use what you've got and cook them how you want. No need to stick to every little detail! Tasty warm, at room temperature or cold.
Ingredients
Instructions